My journey to compete at the Speights Coast to Coast World Multisport Championships started midway into 2014 after a string of successful Adventure Racing results. I decided it was time to return to the race that I had promised myself next time I’d really see what I was capable of.
Death drives determination
Back in 2008 I’d completed the 243km race as a 2 day individual, my Father on my support crew who was in the depth of Prostate Cancer. I’d surprised both myself and my support crew (who were often relaxing in transition not expecting me so soon) and I placed 10th Female. This was the start of opening my eyes to what my body and mind was capable of and after my Father died, I set off overseas determined to make the most of life and all its opportunities.

Living in Brisbane I trained on the Brisbane River, with its limited white water (read none) and off road running conditions fairly tame compared to the rugged, harsh, rocky New Zealand terrain.

A trip over to New Zealand at Christmas to train on the course had me tear the ligaments in my ankle which meant the 4 weeks lead up was not quite as I had planned.

When I arrived in Christchurch, New Zealand 2 days before the race I sat in my kayak for the first time in a Swimming Pool, feeling thankful it isn’t leaking. My support crew who had driven down 1000km from Auckland and my family hurriedly set to work until 11pm to sort my pump and drinking system in my kayak.

On route to Kumara, the west coast start for the 243km Coast to Coast journey we tested out the drinking system in a lake (which miserably failed and required last minute problem solving) and practiced my transitions with support crew. Whilst painfully catching my arm in the zip whilst running putting on my life jacket we were pleased we’d practised and believed that things could only get better.

Arriving at a very quiet Kumara Race Course we set up camp in the Kitchen, happy not to use our tent. By 1130pm I was grumpily taking my flat air bed to sleep in the bathroom to remove myself from a choir of snoring.

At 4am on Saturday 14th of February I was eating cereal and fruit and both excitedly and nervously thinking of the mission ahead.

Racking my bike in the dark and walking downhill towards the ocean to line up at the start I was thankful it wasn’t that cool (especially coming from a QLD Summer.)

I had been seeded 8th so I positioned myself next to 6th and after a crack of jokes and smack talking from Nathan Fa’avae (World Champion Adventure Racer) we were off!

The crazy start of the 243km race involves a mad 2.4km dash from the beach to our bikes (for 55km of riding.) This leg is draft legal so there’s huge pressure to run hard to get yourself in a fast bunch.

I’d worked hard (considering my injured ankle) to improve my run, being likened to a diesel engine and most definitely not the Road Runner.

Getting onto my bike in 5th place I quickly settled into a bunch.

The peloton was riding at a slower pace that I wanted, although there was no one ahead to push to a faster bunch so I just tried to relax.

No one willing to do the hard work

The first person in the Peloton does most of the work leading the group. There were only a few of us willing to take on the head wind to lead the bunch. The others sitting in behind each other getting an easy ride and saving their energy, despite annoyed comments from the leaders for them to take a turn.

Coming off the bike my crew was easy to spot in red. We’d assumed they would be able to run with me in the transition, every second standing still was time I could be moving forward, however it was not the case. I remember looking at my food and drink on the ground instead of accessible in my crew’s hand and made the split decision it would take too much time, taking off down the farm track whilst pulling my bag on.

Whilst struggling to get my breath I realised I still had my ankle reflectors on and my GPS tracker hadn’t been changed over. I took a few frustrated minutes whilst running to change it and ripped the zip tie which meant the tracker was uncomfortably smacking my shoulder for the whole run. It then dawned on me that in my impatience I didn’t take in my necessary fuel and I cursed myself even more, my mood becoming darker and darker as more and more people passed me.

Crossing the first river I dipped my cup into the icy water talking in overdue hydration and headed onto the track along the river. This was not my plan as the day before I had worked out a direct line along the river bed – what was I doing?! After I got my foot caught on a tree root and smashed to the ground it dawned on me I needed food and quick.

The 33km run was tough, rough and technical, and involved picking your way through the rocky river bed up the Deception Valley.

I was battling with my mind, visually taking a baseball bat to my negative thoughts, however the more people that passed me the more angry I got with myself for not being faster, and the more those negative thoughts gained power.

It was a cold 12 degrees at the bottom of the valley and after taking a full body plunge whilst tripping running through the river and getting momentarily carried downstream, I was feeling cold.

As I reached the top of Goats Pass I crammed snakes into my mouth hoping they’d dissolve and I wouldn’t have to swallow them and irritate the already sick feeling in my gut.

On the final 5km along rocks and pebbles into Klondyke Corner all I could think about was the ‘rest’ I’d get when on my bike (‘resting’ being code for going as fast as you can and making up time.)

My next transition was quick and I put on my camel bak full of Infinit so I could concentrate on sucking in calories and powering my pedals for 15km. The first suck to the tube and the fluid poured out and didn’t stop until it was empty. There just went my nutrition! Five minutes previously I had angrily thrown off my full drink bottle, not wanting to carry an extra 750gms, now I regretted that decision.

Running 1km down to my kayak I became tearful, my emotions running wild as the lack of nutrition getting to me. I ran stuffing in banana and rice and could almost instantly feel my body respond with more energy.

Due to risk of Hyperthermia with the cold temperature and winds, paddle jackets were compulsory. I spotted a woman in the water before me and made a note to catch her.

The 70km paddle of braids and a stunning gorge with grade two rapids along the mighty Waimakariri River was tough. After 90minutes I was sucking air in my camel bak – how did I manage to finish 4hours of nutrition in 90mins? Did my support crew mix it wrong? My dark thoughts took over. What was I going to do? I had 55km to go, 1 gel and 1 banana. I’d have to slow my pace down.

At Woodstock the plan was to eat my banana but as I reached into my pocket i couldn’t find it.

Did it fall out?

I was so certain I’d seen it.

Was I hallucinating already?

In Multi-day Adventure Races sleep monsters can be very real, but I’d only been going 10 hours!

I had a bit of a whimper as I envisioned the last hour on empty.

Further along I spotted a people on the river bank and yelled out to them for food. A guy ran into the water pushing a muesli bar into my hands and I felt the cells of my body leap with joy as I made quick work of the bar and paddled the remaining 10km of braided river with a (slight) smile. 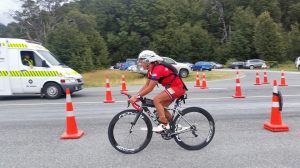 New found strength on the bike

When I was lifted out of my kayak, I ran 800m uphill on wobbly legs to start the windy flat cycle to the finish at Brighton Pier.

Being told I was 8th and it was possible to catch 3 Women, I was excited to get on my bike and make short work of the 70km along the Canterbury Plains. I took off feeling fast and strong. My speedo read 34.6km/hr average and I told myself to hang on as I starred down the long and straight South Eyre road, passing 3 men but seeing no women in sight.

An hour in and I started sucking on air from my camelbak and that sinking ill feeling washed over me. Out again so soon?! This should not have happened!

My arms were aching as I started to see the speed on my speedo fall and I grumpily gave up hope of a fast final ride, opting to finish feeling good and not driving myself into the ground.

The run up the finishing chute at Brighton Pier to receive my can of Speights from the one and only 9 times winner Steve Gurney, and I’d done it.

243km from one side of New Zealand to the other, in 8th place in a time of 15hours and 56 seconds!
I’d learnt a tremendous amount about myself and the race and all I could talk about was ‘Next time…’
Yip 2016, I’ll be back!

A massive thank you to my amazing support crew (often putting up with my grumpy hunger!) Felt Bicycles and the Peebles Group, and the impressive Richard Ussher with his new and definitely improved role as Coast to Coast Race Director.
Wow what a race!

Check out the other blog posts here!